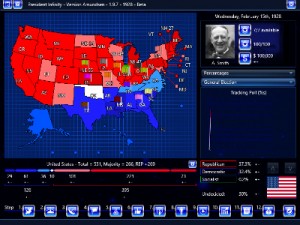 *This scenario has been greatly updated by the Historical Scenario Commission on September 15, 2017. It can be downloaded here: United States – 1928 v.2.0

The Roaring Twenties is still raging. However, an unforeseen economic crises due in part to the high tariff of the 1920s is only a year away. President Coolidge has declined to serve another term, making the way for many Republican candidates in the 1928 election.

For the Republicans, Herbert Hoover has the closest ties to the Coolidge administration. His “Play It Safe with Hoover” campaign revolves around this connection as he attempt to be the candidate of continuity. However, Hoover, unlike the conservative Coolidge, is a moderate with some progressive tendencies. As such, he has challenges within his own party from the left and from the right. Although, Frank Lowden, another moderate, is his toughest challenger.

For the Democrats, they’ve learned that choosing a rural conservative for their ticket led to a major landslide defeat in the last election, as well as many voters flocking to La Follette’s Progressive Party. In an attempt to unify the party, the Democrats give most of their support to the leader of the urban wing of the Democratic party, Al Smith. However, Smith is a Catholic, which may scare away many severely Protestant voters. Can he overcome his drawback to his candidacy? Al Smith’s challengers are primarily Southern Democrats, who have little chance of beating Smith in the primaries.

Unlike in 1928, there is not a major 3rd party. The Socialist Party is only a fragment of its former self.

This scenario has many what-if possibilities: