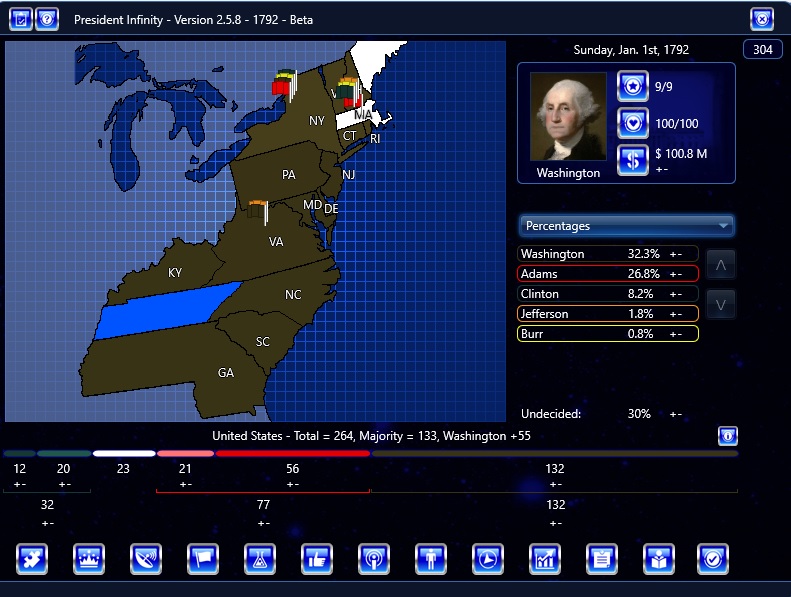 [Note: This scenario has been greatly updated by the Historical Scenario Commission on July 11, 2017 and on December 12, 2017.]

President Washington, used to myth-like idolization, is incurring the first vocal criticism of his life since his defeat at the Battle of Long Island in 1776, nearly 16 years ago. The brunt of his criticism comes from Washington’s efforts to centralize government power, predominately through his open adopts of the economic policies of Treasury Secretary Alexander Hamilton. Additionally, Hamilton’s advice has taken clear precedents over the advice of ideological rival Secretary of State Thomas Jefferson, who is becoming increasingly isolated and disgruntled. In fact, the followers of Hamilton are monopolizing the offices of the Washington administration.

Part of Washington’s Federalist’s leanings involves foreign affairs. Their official ally France is undergoing a revolution of extreme violence, which not only disrupts trade, but threatens the establishment with fears of such violence occurring in America. Washington, like Hamilton, sees a return to a closer relationship with Britain as the best change for financial and governmental stability. Here, Jefferson is the odd man out again, as he favors closer ties with the French. In short, Hamilton is nullifying Jefferson’s influence at the State Department.

Hamilton’s influence has led to the formulation of political parties. Those favoring Hamilton’s pro-business, pro-industrialization, pro-bank, pro-centralizing government are known as the Federalists. US Rep. James Madison has recently organized politicians opposed to most or all of these Federalist ideals and has elevated the more charismatic Thomas Jefferson as the leader of this opposition. In the North, George Clinton and Aaron Burr lead a Northern variety of this Jeffersonian Republicanism, which aims to appeal to the people, rather than to elitist authority.

Despite this, Washington is still popular and seen as indispensable. Personally, he wishes to retire, but both Federalists and Jeffersonian Republicans urge Washington to run for a second term as the country eases into a relationship with a home-grown federal government.

As such, Washington is expected to win unanimously once again. The real race is for the vice presidency, and the occasional quasi-monarchist comments by John Adams makes the incumbent VP open to attack by Republicans, who hope to elevate Northern Republican NY Gov. George Clinton to the position.

As expected, Washington won a vote from every delegate. The delegates had a harder time considering their chose for VP, but as was probably likely, Adams won reelection, but at a much smaller margin than he had won by in 1788/1789. George Clinton made a respectable showing, and Thomas Jefferson and Aaron Burr receives some token votes. 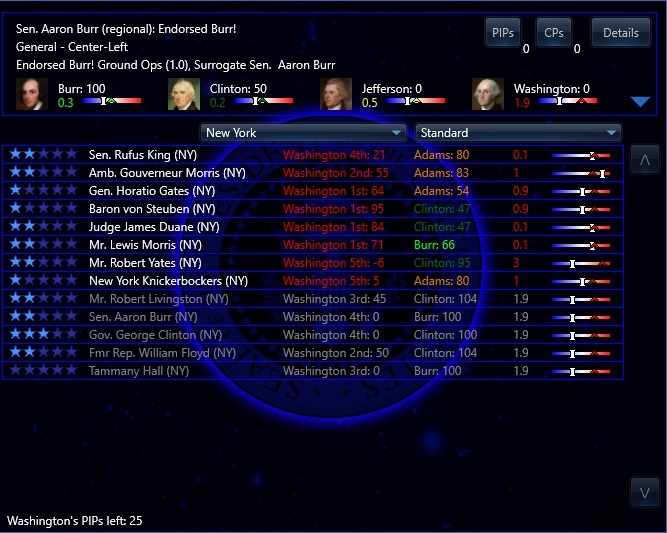 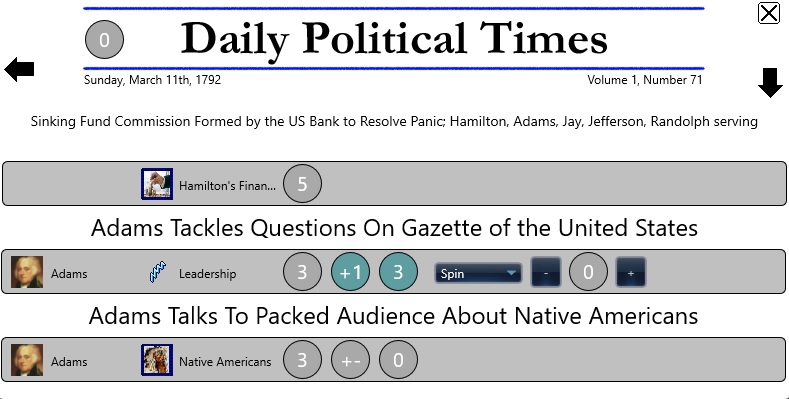