As taken from Wikipedia: The Republican party’s ticket has carried South Carolina in every election since 1980, and with the exception of Jimmy Carter and Walter Mondale’s carrying the state in 1976, the Republicans have carried the state since 1964. In the 2012 election, Mitt Romney and Paul Ryan defeated Democrats Barack Obama and Joe Biden by a margin of 54% to 44%. The state has not had a Democratic Senator since Ernest Hollings retired in 2005. The state has had a Republican majority in the United States House of Representatives since the so-called “Republican Revolution” of 1994. However, some have suggested that South Carolina may become a battleground state in this election cycle because of Clinton’s lead in the national polling. A poll released on August 10 by Public Policy Polling had Trump leading Clinton by a margin of only 2 points, and an internal poll commissioned for the South Carolina Democratic Party had the race tied. This led Larry Sabato’s political prediction website Sabato’s Crystal Ball to move the rating of the South Carolina contest from “Safe Republican” to “Likely Republican” on August 18.

Here you have an opportunity to battle 2016 out in South Carolina;

Primaries – For the GOP, Dems use the official vote tallies for each county as delegates and turnout with a 0% threshold which provides a popular vote type system. Libertarian and Green (Delegate numbers are 50 per county as I couldn’t find specific data for the Greens/Libertarians in SC.)

Endorsers – The Governor, Sec. State, Senators and Representatives have been added to the default endorsers. (I removed Governors, Senators from other states to reduce overall numbers.) .

Counties – Counties have accurate populations, flags (where I can find them). Issue centres are the default SC positions for those counties that voted the same as the state overall while DEM counties have been allied to the DEM platform. 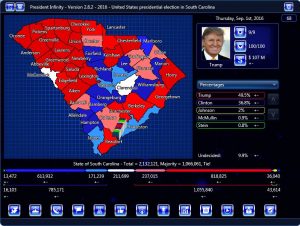