After a decade of high growth in the Peruvian economy, a majority of voters claim they don’t feel the country is making any progress. Most of the growth comes from the boom in the mining sector, policies favoring foreign investment, but poverty remains rampant. The next president will face high poverty, insecurity and corruption, at the same time the coverage of basic necessities remains painfully short. Environmental groups and indigenous communities remain opposed to the current mining policies, which has and continues to be the engine of the Peruvian growth. The next president will have to diversify the country’s economy.

Keiko Fujimori, daughter of the Former President of Peru, Alberto Fujimori, both from Japanese descent, is now attempting to win the race for the presidency for a second time. In her first attempt in 2011, she felt short with 48,5% of the vote. After the election she begun the campaign for 2016, establishing a political party, with grassroots all over the country and traveling more than any other candidate in history. Her work payed off and after winning the first round of the 2016 presidential election with 40%, doubling the candidate in second place, she is closer to become the first female president of Peru. Althought her candidacy inspires and rallies millions of people who remember her father’s accomplishments, millions of others march against the possibility of the return of, what they claim, was Fujimori’s authoritarian rule. While President Fujimori remains in jail with widely known health problems, a majority of Peruvians according to all polls, favor in a large margin a presidential pardon. With incumbent president Humala favorability in the low 20%, Keiko feels vindicated and that her time has come.

Pedro Pablo Kuczynski former Minister of the Economy and successful business man, will face Keiko in the run off. Kuczynski a right-wing figure in Peru, master mind of the current economic model, that has benefited the high growth of the country widely praised around the world, faces critics at home who say he is for the rich and the large corporations. After not making it to the run off in 2011, became one of the most vocal supporters of Keiko in an attempt to defeat the then radical-left-wing candidate Humala. Surprisingly, the 78 year old, made it to the run off with barely 20% of the vote, well behind Fujimori’s 40%. He is well-perceived and supported by the well-educated and young people. Kuczynski has labeled himself as the candidate of the “ones who want democracy to remain” alluding to the authoritarian past of Keiko’s father, which makes the 2016 Peruvian presidential election one of the most polarized, contested and watched races in history. 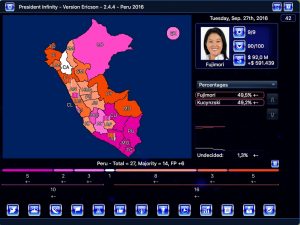