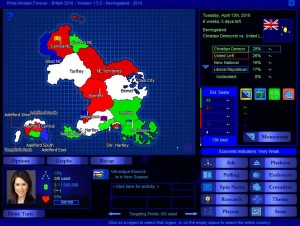 In the December Revolution of 2009, the small South Pacific nation of Berringsland was shaken to its core after its dictatorial regime, led by the National Party, was overthrown in a massive popular uprising. Its economy in shambles, Berringsland faces a rough transition to democracy with a guerilla campaign from supporters of the old regime, and cultural questions on issues of national identity, religion, and race rising from the past. Now Berringsland is replacing the Provisional Assembly with its first democratic election in over three decades. Who will lead this small island-nation into its new birth of freedom?