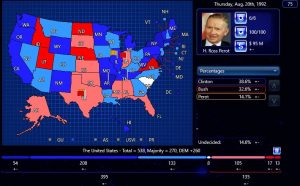 At this point I have only included the 3 main candidates and their veeps. Of course I “backdated” the correct electoral votes.  Region percentages were taken from the real election data. I kept most of the main issues, removed some that are only for 2016.  Added two issues: NAFTA and Business Policy.