After a tumultuous second term in office, abandoning most of it’s policies from it’s previous government, can Bob Hawke make history and lead Labor to it’s subsequent 3rd election victory? Or will John Howard and the coalition capitalize on the disillusion of labor’s heartland and form Government? (all whilst avoiding the disastrous Joh for Canberra campaign)

This is my first published campaign so feedback is more than welcome.

I worked on this a few months ago and glad to be able to share with all of you. I have included the following candidates to this scenario:

Once you have your Author account, log in and go to Media on the left side of the screen, and then Add New. From there, you can upload your compressed (zip) campaign file.

Then, create a new Post and in a new block (new link) click the ‘Add file’ button, then ‘Media Library’. From there you can link to the file you uploaded. 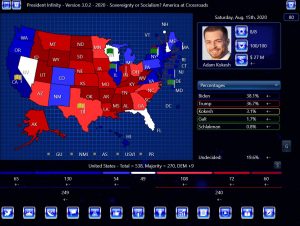 This is my attempt at a 2020 campaign. As a disclaimer, I am a right-leaning libertarian but tried to keep this scenario as fair as possible. If you notice anything that looks very wrong, let me know and I will research it for use in newer versions.

My Democrat list of candidates is up-to-date (I think) as of at least 18 seconds ago. Really, I’m running out of color combinations, that was the biggest problem!

I’ve added recent issues such as the Mueller Probe, The Border Wall, and The Green New Deal. I was going to do “Me Too” and/or “Jeremy Northam controversy”, maybe in the next version.

Since I like to have a little fun with this, I’ve added the Objectivist Party, and the Freedom Caucus, with of course Schultz running as independent, and the latest Libertarian slate. Libertarians have very few parties, almost all the delegate vote takes place at their Memorial Day Weekend convention, so all of the primaries occur at once for themServo75 Trump2020

I have gone through all the old Canada campaigns and fixed broken links to campaign downloads.

If you find a campaign download that has a broken link, please let me know with a link to the post in the comments. I can then look at it and see if it can be fixed.