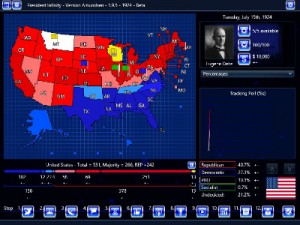 *This scenario has been greatly updated by the Historical Scenario Commission. It can be downloaded here: United States – 1924 v2.0

This election takes place in the middle of the Roaring Twenties, in what has been called “High Tide of Conservatism,” as both parties nominated conservatives. The political conservatism of the decade was a reaction to the Progressive Age, which was prevalent for two decades.

For the Republicans, Coolidge has proved popular choice after taking over the presidency after the death of the scandal-ridden Warren G. Harding, clearing out the offenders in the administration and leading during a time of economic prosperity. However, many progressive Republicans who did not like Coolidge’s inactive presidency preferred progressives such as Hiram Johnson and Robert La Follette.

The Democratic party was much less unified, which placed them at a disadvantage. Al Smith led the urban wing of the party. William Gibbs McAdoo (son-in-law of Woodrow Wilson) led the rural wing of the party. Oscar Underwood attempted to be the leader of the Democratic South. The compromise choice during the nomination fell on former ambassador John W. Davis, a conservative from West Virginia. He seemed to be the best candidate at the time to compete against a successful conservative Republican. However, his nomination upset many progressive Democrats.

A strong Progressive Party reemerged with Robert La Follette as the leader. Although, he was nominally a Republican, most of the progressives that joined his ranks, outside of Wisconsin, were Democrats that would not support Davis. As such, Coolidge won in a major landslide. The Socialist Party is still available, but much weaker in 1924.

The campaign allows for what-if scenarios: