This is an alternate-history campaign.

Ross Perot came to power in the most unique situation, of any President in the 20th century. Perot won as a independent candidate in 1992, but since then has formed a national party, calling the the “Reform Party”. Perot initially had very high approval rating, but since then has slumped in popularity after, despite his promises, the country fell into legislative gridlock. Despite this Perot was able to reject NAFTA, and begin the phase of withdrawing American forces in Europe. Perot initially said he only wanted one-term, but in coming months has made more and more overtures about running for another term. Can Perot win a second term? And who will the Democrats nominate after a close 2nd place finish in 1992, can they win? Will the Republicans be further humilated after a third-place finish in 1992?

This election is a great improvement on a former 1996 scenario. This new 1996 election was updated by the Historical Scenario Commission on Nov 29, 2017. It can be downloaded here: United States – 1996v.1.1

Bill Clinton is being challenged for the presidency just like every president except Washington. Will he succeed in winning another term? Will Perot finally win the presidency? Who will win the Republican Nomination? I don’t know but, it’s gonna be interesting. 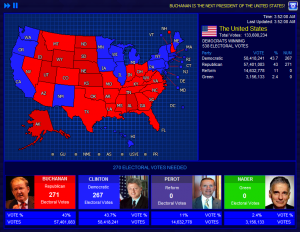