Based on the AlternateHistory.com story by Drew.

John Julian McKeithen, a former governor of Louisiana, decides to stand for the Democratic nomination. He’s a more moderate figure than George McGovern and can appeal to a wider audience, and crucially also comes from a political background that has acquainted him quite as much with dirty tricks as Nixon.

Theoretically, thanks to McGovern refusing to step down and standing as a “Peace” candidate, as well as George Wallace staying in the race, no one wins the Electoral College vote. I, however, haven’t been able to get such a result. Nevertheless, I’m releasing it now and am open to suggestions for refining it.

UPDATE 2/4/19: Reinstated the Crystal Ball. I had no idea that Barry Commoner was in fact a real independent candidate in 1980! Oops!

This election is an expanded/updated version of an existing 1972 election, which has been created by the Historical Scenario Commission. It can be downloaded here: United States – 1972 v.1.0

This scenario includes the historic candidates, as well as several what-if candidates. 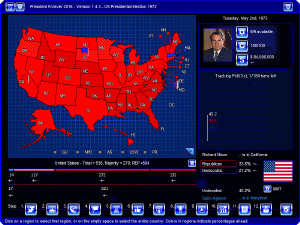