*This scenario was greatly updated by the Historical Scenario Commission on October 14, 2017: United States – 1964 v.2.0

For the Democrats, LBJ is the clear frontrunner, but faces a challenge from George Wallace, a conservative Southern Democrat. Additionally, a few favorite son candidates hope to hold their state’s delegates. What-ifs include John F. Kennedy, Hubert Humphrey, and Eugene McCarthy. Robert F. Kennedy is a VP option.

For the Republicans, the party sees two stronger challengers for the office: Conservative Barry Goldwater and moderate Nelson Rockefeller. Several other Republicans have an outside chance at taking the nomination from these two. What-if candidates include Richard Nixon.

Comments will be helpful in improving this scenario. 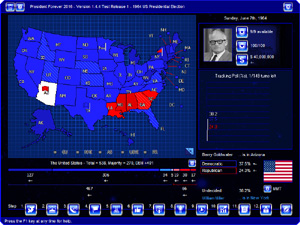 “With the mourning period of the Kennedy assassination over his Vice President Lyndon Johnson takes on Barry Goldwater.”