Scenario created by Wiw. I uploaded it with his permission. 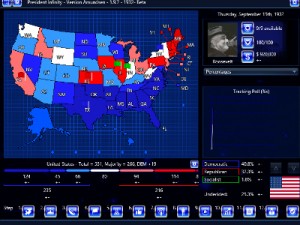 *This scenario has been greatly updated by the Historical Scenario Commission. It can be downloaded here: United States – 1932 v.2.0

America is facing economy disaster as the Great Depression enters its third year. Will President Herbert Hoover be able to win a second term after a marred first term? Can the Democrats find a politician that can inspire optimism in one of the most trying times in US history?

For the Republicans, the incumbent Herbert Hoover has the most powerful campaign machine despite being a marred candidate. He faces only two serious challengers: John J. Blaine and Joseph France. The goal for France is to win enough delegates to lock up the convention so that former president Calvin Coolidge can be nominated as a compromise choice (Coolidge declined to enter the race personally).

The Democrats enter the race with a clear front-runner. New York Governor Franklin D. Roosevelt has the confidence and optimism that the leading Democrats are wanting in their candidate. However, FDR’s mentor and 1928 nominee, Al Smith, believes that the nomination is rightfully his. Feeling betrayed, he fights FDR just as hard as he fights the Republican administration. Another strong candidate is the conservative Speaker of the House John Nance Garner from Texas. Can FDR unite the urban and rural wings to launch an effective campaign? Other candidates include the locally popular candidates James Reed and Newton D. Baker.

Lastly, the Socialist Party is once again the strongest 3rd party.

This election allows for some what-if scenarios: