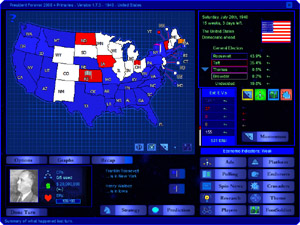 “The Democrats suffered a drubbing in the 1938 midterm elections, but President Roosevelt remains personally popular. As the world descends into war, will Roosevelt seek an unprecedented third term? If not, can the next Democratic nominee hold the New Deal coalition together? And who will emerge from the wide-open Republican field to capture the nomination?”