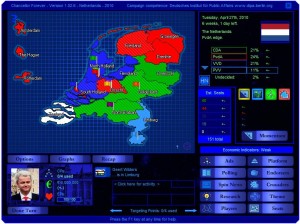 With the Austrian People’s Party withdrawing support from their coalition with the Social Democratic Party, a legislative election has been called in Austria that’s largely expected to be just a slight realignment of seats between the two principal parties. However, with immigration viewed as threatening to more and more Austrians, will the far right make gains this time around?

“In the late 1980’s, a campaign began in Northern Ireland that protested all British political parties should contest in Northern Ireland in Westminster elections and future Stormont Assembly elections. This was initially unpopular, however, as the troubles became more uncontrollable, fingers were beginning to be pointed at the NI political parties for helping to drive a split between Catholic and Protestant citizens to a worse extent. Both sides of the divide were held resposible. The Ulster and Democratic Unionists were soon abolished for their increasingly right wing attack on NI independence from the UK while, Sinn Fein promoted terrorism as plausible to achieve a united Ireland. Soon, a more moderate Conservative and Labour party to take over, and the threat to the Nationalist parties to merge together and reform or Sinn Fein politicans will face expulsion.”

“Gimli is an island nation that represents the best the Nordic nations have to offer: high standard of living, a comprehensive welfare state, and social tolerance.  However, the pleasant island country is reeling from an economic crisis, immigration scandals, and a rapidly spiralling deficit.  Can the incumbent Center Party weather this “perfect storm?”

Author: GOP Progressive and Treasurer of the PC

“Rocentia is a former Anglo-Russian colony in the Americas that has established itself as a sovereign micronation.  It is holding elections in 2010 on the eve of its military intervention in Turaqistan, rising tensions between Communist and non-Communist states, and domestic problems.  Can the incumbent National Party keep control over government?”

“A Japanese-themed island nation in Micras, Kozakura was severed from its mother country Shinkoku after a bloody war.  Since then the island has had successions of government and is known for its relative political instability.  However, some stability has returned to the island with the election of a National Liberal government in 1999.  Will the incumbent National Liberals sweep to comfortable re-election, or will the opposition parties pull off an upset victory?”

“The ruling Welsh Labour party have lost their majority in the Welsh Assembly after one Labour AM left to become an independent. This was embarrassing for the party. The prospect of Lab-Plaid coalition looms in this election, as Labour’s popularity has dropped slowly but steadily.  Once the new term begins, the election winner(s) will have more powers in the Assembly than ever before, thanks to the Government of Wales Act 2006. Nationalist party Plaid Cymru, have complained the increased devolved powers don’t go far enough. After a disappointing 2005 General election, Plaid hope for better results. The Conservatives are on course to hurt Labour’s vote and for their best result since the Assembly began. Meanwhile, the Lib Dems are  looking stale as criticisms continue of their leader.”

From the scenario designer: “Stormark is a fictional micronation with strong Viking and Scandinavian roots. It is holding its elections for the Althing during the background of several foreign and domestic crises. Will the governing Konservatives retain power or will they be defeated by a Social Democrat-led coalition?”

From the scenario designer: “With the Federalists winning control over the US government in 1996, their Mexican cousins have pushed for an American Union with the US and other American nations. But with poverty, corruption, crime, and the threat of terrorism all important issues in the upcoming election, will the Federalists or any of their opponents triumph against the ruling Christian Democrats?”

From the scenario designer: “Will Salmond be able to capitalise on his successes in 2003 and take the Scottish Parliament, or will Scottish Labour leader Jack McConnell retain Labour control? Also, will there by any breakthroughs by other smaller parties? With thanks to SaskGuy and Zion for their help with graphics and troubleshooting.”