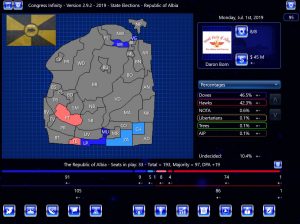 It’s still in some development, but mostly it should be done, I’m really bad at balancing, so please tell me if there’s any issues of one party winning every time. Also this is my first publicly posted mod!

This is a beta scenario, and is still in progress.

Basically, this is a scenario for Congress Infinity. Deleting half the Senate Seats in the 2014 Senate Election scenario, I have made a 2014 Gubernatorial Elections scenario.