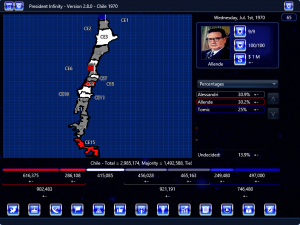 In 1970 the Chilean situation is not good. With an economy in the midst of recession, the Chilean people look for someone who can lead to a brighter tomorrow. Of course, foreign and business interests have other things in mind. In this three horse election, the fight is between Marxist Salvador Allende, Rightist Jorge Alessandri, and Christian Democrat Radomiro Tomic.

In what proved to be the toughest election of his political career Ted Kennedy faced off against young moderate Mitt Romney. In this campaign you can relieve that exciting election. Constructive criticism is welcome