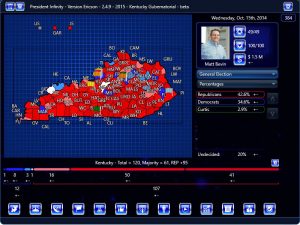 Edited the Interviewers a little

Added all of the members of the state house as endorsers

75% of the state house has been added as endorsers

Half of the state house members have been added as endorsers

Minor changes to candidates and issues

Will you complete the Republican revolution in Kentucky or will the Democrats hold onto the governorship?

Note: Thanks to ConservativeElector2 for finding the map.  Also, anyone can use this scenario as a basis for other Kentucky elections.

The Communists are the popular party. The traditional parties have had a bad four years. Will the Republicrats be able to retain control? or will the Communists take over and start to put in their policies? The Communists have won control of both houses in the mid-term elections. There are many openings on the Supreme Court. If a Communist wins, there will be a majority of pro-Communist judges on it. Can someone stop the Communist wave or will the US turn into a Communist nation?

Update 1.4: adjusted some of Fong’s numbers

Update 1.3: Fixed some data dealing with the Observation Party as well as its bio. 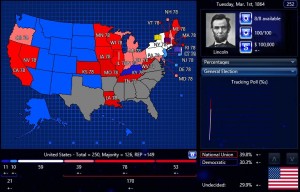 *Note: This election was improved and updated by the Historical Scenario Commission

Thank you to VCCzar for all his help.  I could not have done it without him.

Fixed errors because of a few events

Updated state flags (Thanks to Patine for providing those)

Added Richard Rush as a candidate

Added William Wirt as a candidate

Added Rufus King as a candidate

Added Daniel Webster as a candidate

Added Louis McLane as an endorser

Added some VP choices for candidates

Added Nathaniel Macon as a candidate

Added another Martin Van Buren as a VP candidate for Crawford.

Added Crawford onto the ballot in Connecticut

Put issue familiarity and debating at 3 for Massachusetts Unpledged Electors

I have added the Massachusetts Unpledged Electors

Edited the map(took out Michigan and Arkansas)

Fixed the error when it crashed on election night

Fixed the home states for Mrs. Clay and Adams