Premier Ralph Klein seeks his first mandate from the people of Alberta. Alberta is currently reeling from a lagging economy and a growing $20 billion dollar debt. Can Klein distance himself from the Don Getty record of fiscal mismanagement, and use his charisma and folksy populism to hold off Decore’s transformed Liberal party?

After the ‘Miracle on the Prairies’ in 1993, popular Premier Ralph Klein seeks his second term. This election is seen by many as a ‘Ralpherendum’ on Klein’s balanced budget and extremely deep budget cuts. Can the Liberals and the seatless New Democrats knock him out of power?

A booming economy and huge budget surplus have Alberta flush with cash. Can the New Democrats and Liberals knock off a highly successful Ralph Klein who is seeking his third term?

Premier Ralph Klein has stated that this will be his last election. Will he sleepwalk to a huge victory or will the opposition parties manage to gain ground?

This is the first of the old PM4E Alberta scenarios that I am hoping to remake for the new infinity engine.

Premier Ed Stelmach is seeking his first mandate from the people of Alberta. Alberta’s white-hot economy is beginning to slow and the Opposition has battered the government on the oil royalty issue, health care premiums, and affordable housing. Will Premier Stelmach be able to win another solid majority, or will the PC string of victories end at 37 years?

As Premier Alison Redford dropped the election writ, she sets off a 28-day provincial campaign that will send Albertans to the polls on April 23 2012. Redford requested Lt.-Gov. Donald Ethell end the Legislature, setting off what is expected to be one of the most competitive election battles in decades. The 28-day campaign will see the PC leader try to extend her party’s 41-year grip on power, while Danielle Smith of the Wildrose Alliance, Raj Sherman of the Alberta Liberals, Brian Mason of the NDP, and Glenn Taylor of the Alberta Party will all be trying to end the Tory dynasty that started in 1971.

Polling data is the 2015 election results as taken from https://www.elections.ab.ca/ but I’ve added a polling shift to reflect a Mainstreet poll on the 7th April start date which puts the PC, WRP and NDP at a roughly even split (small WRP lead).

Can you win as the NDP and end the political dominance of the PC’s in Alberta or will the PCs retain power? Maybe The Wildrose Party will take the Conservative baton forward?

v.2 – Very small update to this scenario to add some ministerial positions and bonuses to riding candidates. 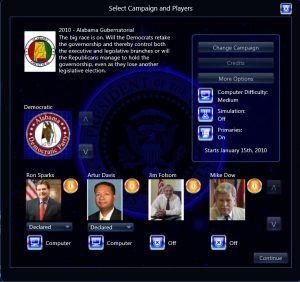 With the addition of the Preference vote for Australia, I’ve decided to update my 2010 scenario 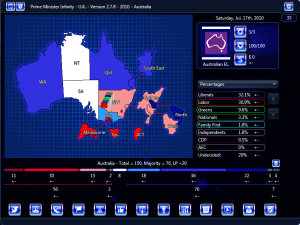 With the addition of the Preference vote for Australia, I’ve decided to update my 2013 scenario 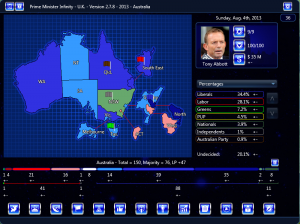