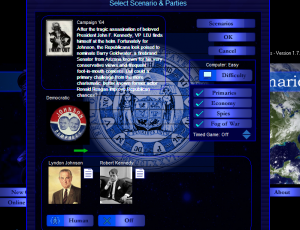 Following his failed Presidential campaign in 2008, John McCain was forced immediately into a tough Senate race in 2010, facing a GOP primary challenge from the right. In the end, he won the general by a whopping 59-35 margin.  But his untimely death on July 4th weekend in 2014 led the AZ GOP scrambling for his replacement to run in the upcoming special election. Though the state grieved over beloved fmr. Sen. John McCain’s death, the race was by no means considered an automatic pick-up for the Republicans, despite some of the big names running on their side. Democrats were also successsful attracting big-name attention to their race, most notably recently recovered fmr.Congress-woman Gabrielle Giffords (famous for having been shot by a deranged man during a campaign event in January 2011). But w/ GOP superstar Sarah Palin having recently become an Arizona resident, and with Gov. Jan Brewer term-limited from running for another term as Governor, which AZ GOP female heavyweight will emerge to challenge former Senate candidate and moderate Jeff Flake in the GOP primary?