It is July 2019, and President Trump’s approval rating has never been above 40% in the average poll.

Donald Trump’s presidency has proven to be as controversial as his 2016 campaign. While his Midwestern base is exceptionally happy, he has alienated many Republicans, mostly with his unique presidential style, but also with his connection to scandalous figures from the Russian probe and some of his policies. Republicans are mostly against impeaching Trump.

Meanwhile, Democrats struggle between reformist establishment figures and populist progressives leading the party, but they have managed to narrowly retake the Senate and the House. As such, impeachment seems likely as more evidence comes in from the Russia probe.

Both parties continue to struggle with making their voters happy, while maintaining the stability and order that the establishment of both parties think is required for American supremacy. 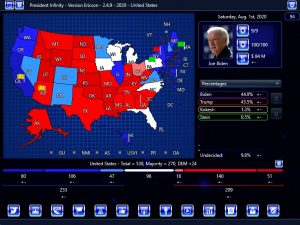