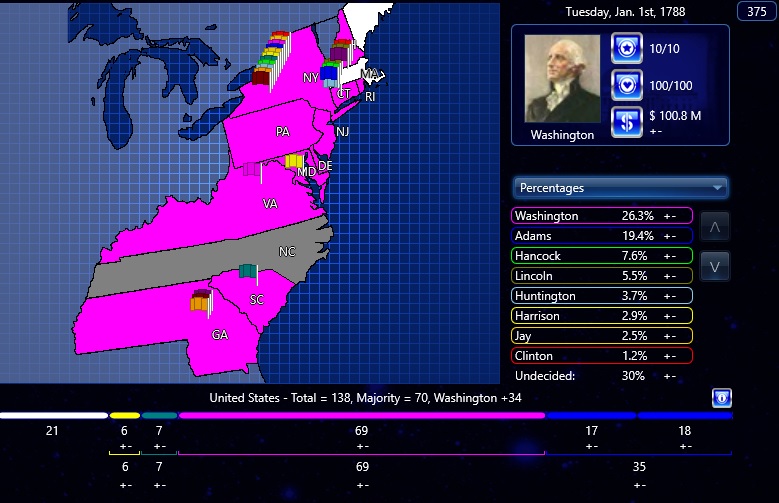 *Note: This election was improved and updated by the Historical Scenario Commission on July 8, 2017 and on December 11, 2017.

The first presidential election take place amid uncertainty and chaos. Domestically, the country is struggling economically, as a result of a long war with Britain that has left the country somewhat crippled in production and trade, especially when you consider the bulk of our trade had been with Britain. The present Articles of Confederation, which binds the former colonies, has proved to be ineffective in the case of emergencies and in competing with European power.

As such, leading figures from each state had called a Convention in Philadelphia to amend the Articles of Confederation; however, the grand majority of delegates pushed for a stronger central government, resulting in a Constitution of the United States. One provision called for the election of a chief executive–the President of the United States.

As the election year of 1788 arrives, the several states are in the process of ratification, but some states are on the fence in regards to the Constitution. The more “radical” politicians, such as Patrick Henry, Samuel Adams, Thomas Jefferson, and George Clinton have been left out of the process. However, with the support of Benjamin Franklin and George Washington, and the authors of the Federalist Papers–Madison, Hamilton, and Jay–ratification seems more than likely.

In foreign affairs, a Revolution is brewing in France. While the possibility of a brother Republican is exciting, a revolution in France guarantees that trade with our new top trade partner and ally will greatly diminish, as the British are likely to block French trade.

This contest was really one for the Vice Presidency, as General George Washington, who had been president of the Constitutional Convention, was expected to win a vote from each delegate. As required from the Constitution at the time, the delegates would have a second vote to select the Vice Presidency. As Washington was a Southerner without foreign affairs experience, a pro-Constitution Northerner with foreign affairs experience was likely to become the next VP. This left John Adams, the first minister to Great Britain, as the frontrunner for this spot, since Benjamin Franklin, at 82, was too old, and John Jay was likely too young at 42. Those opposed to the Constitution turned primarily to NY Governor George Clinton.

As expected George Washington won a vote from every elector. John Adams, who was likely to win, was able to secure victory, arguably by a larger margin than expected, as he won more votes than all the other VP-candidates combined. This is most likely because New York was too disorganized to send electors, which cut the feet from under a John Jay or George Clinton ticket. Some argue that Alexander Hamilton might have schemed to prevent Clinton, an anti-Federalist, from entering the government and destroying it from within, even at the expense of fellow NY Federalist John Jay.

What if these candidates had ran? 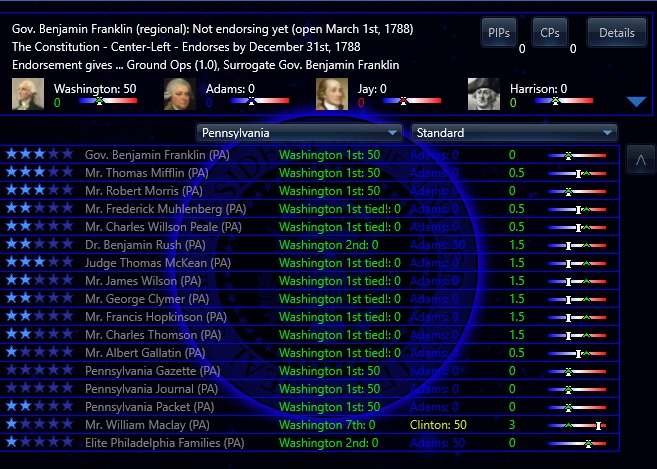 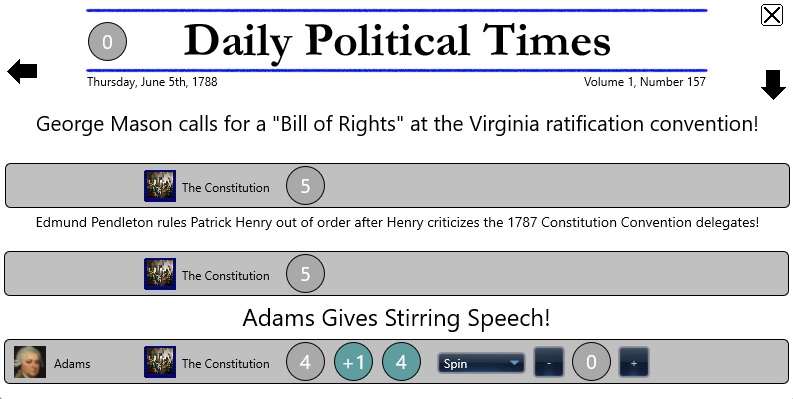