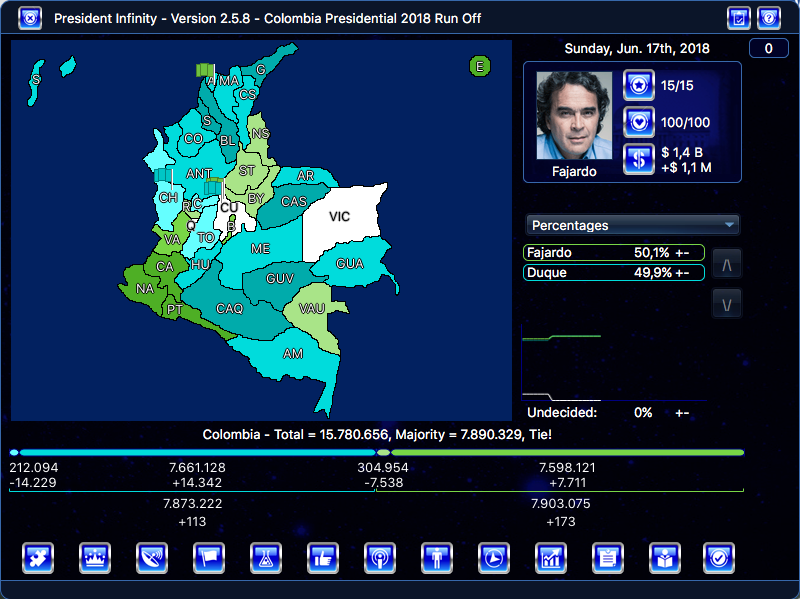 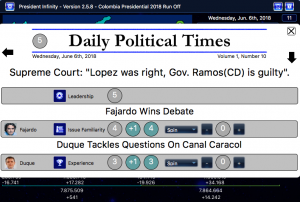 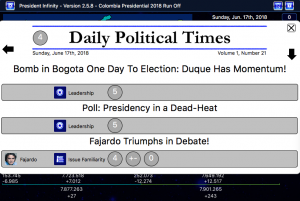 After a hard-fought campaign in the first round, Sergio Fajardo won the We Can Alliance primaries, Ivan Duque won the Democratic Center-Conservative Party primaries, German Vargas Lleras from Radical Change Party was nominated, Gustavo Petro from Human Colombia was nominated, and Humberto de la Calle from Liberal Party/Party of the U won the primaries.

After the first round vote on May 27, Fajardo and Duque narrowly advanced into the run-off in June 17. Vargas Lleras endorsed Duque, De la Calle endorsed Fajardo and Petro called for abstention. Nobel Peace Prize winner, current and highly disapproved president Santos, who doesn’t want Democratic Center anti-peace stance in the presidency, is working to elect Fajardo (who favors the peace deal) as the next president, even thought they are not remotely close.

Although Fajardo brings stability to the economic class, the Democratic Center is trying to tie him to the evolving Venezuela crisis and collapse, for having made an alliance with the leftist Alternative Democratic Pole. Venezuelan collapse and neighboring Maduro’s regime atrocities are every day on the news. Both candidates disapprove the current government of Venezuela and call for immediate elections in that country, although Duque goes further and more aggressively.

Support varies among regions but the presidency will be decided in a dead-heat.

Antioquia, Caldas, Risaralda and Quindio the “Paisa Region”, is highly polarized in the run off because Fajardo and Uribe(and thus Duque) are equally and highly popular. Fajardo and Uribe were governors of Antioquia, and mayors of Medellin, the second most important city in the country. Antioquia’s natives colonized decades ago the departments of Caldas, Risaralda and Quindio, and they still share a common history, architecture, culture, accent and idiosyncrasy.

The North Coast/Caribbean coast/”Costeño” culture region: La Guajira, Cesar, Magdalena, Atlantico, Bolivar, Sucre, San Andres Isles and Cordoba. This region has the same accent and common traits with the coastal population from the different countries in the Caribbean like Puerto Rico, or Venezuelans. The “Costeños” consider themselves different than the rest of Colombians, some are pushing integration between them in order to get support for independence from the rest of the country. This region was Vargas Lleras territory in the first round, having won with more than 10% to 20% on the first round on May 27 in every department of the North Caribbean Coast, while Fajardo and Duque disputed the second place.  After Vargas Lleras narrowly not making it to the run-off, he supported Duque and as expected, Duque now leads in the North Caribbean Coast heading into the run off by more than double digits.

Central/Interior departments: Norte de Santander, Santander, Boyaca, Cundinamarca, Tolima and Huila. With the exception of Huila, who disapproves highly the peace process and supports Democratic Center as a party, there’s a dead heat in most of the rest of the departments because of the degree of high polarization between both campaigns, that represent very different priorities.

Nariño and Cauca are heavily for the peace process and against the policies of Uribe’s party.  Valle del Cauca (with Cali the third largest city in the country) is leaning for the “We Can Alliance” candidate because it likes the corruption argument against the political class and supports slightly the peace process. Choco: Vargas Lleras territory in the first round, is in a dead heat because the high poverty is playing a double effect, on one side the political machinery is buying poor people’s votes, but the corruption-crisis in that department is such, that rest are clearly tired of the same old politics. This department favors heavily the peace process.

Llanos region: Arauca, Casanare, Meta, Caqueta, Putumayo, Guaviare, Vichada, Guania, Vaupes and Amazonas. The least populated region in the country has a high approval rating for Uribe’s presidency especially in Casanare, Caqueta and Guaviare, were the FARC terrorist group has caused great amount of damage with decades of war. The exception is Putumayo, which has a very negative opinion of Uribe’s party and policies and is heavily for the peace process.

Bogota DC: The capital of Colombia deserves a special place in the list. Bogota has always voted against the political class, for the “outsider”, the change “agent” and will likely support the candidate that rallies the young, which undoubtedly is the “We Can Alliance” candidate. Bogota heavily favors the peace process deal with FARC, making it hard for the Democratic Center to make inroads there, unless war becomes the priority again. A terrorist attack heading to election day might decide this evenly divided, close and heated election.