The United Kingdom is voting in a historic referendum to decide whether they want to Leave or Remain in the European Union. With the vote on a knife-edge and no real data to predict the winner, everything is up for grabs.

The HQs of ‘Vote Leave’ and ‘Britain Stronger In’ are the main candidates but David Cameron is available as alternate ‘Remain’ leader, while Boris Johnson is the alternate ‘Leave’ leader.

If you fancy having a go with Nigel Farage and the Grassroots Out, they are available but start with 0% as they were not on the ballot and there is no polling data for them.

Polling data is taken from the Electoral Commission who are selectable as an observer.

All feedback is welcome 🙂 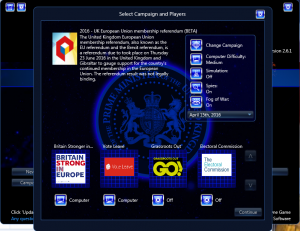