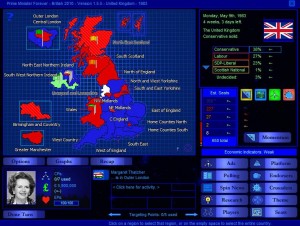 Margaret Thatcher and the Conservatives have governed for four years, through the low of recession and the high of victory in the Falklands War. The sharp leftward shift of the opposition Labour Party has brought about a new, centrist alternative: the SDP-Liberal Alliance. In the face of political and social fragmentation, Thatcher present a vision of economic freedom and robust nationhood.