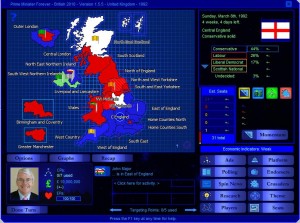 John Major succeeded Margaret Thatcher as Prime Minister in 1990. He has received plaudits for the Gulf War and opprobrium for the long economic recession in turn. Major has delayed the 1992 election for as long as possible to stave off the challenges from Neil Kinnock’s resurgent Labour Party and a new party, the Liberal Democrats. Will this pay off?